The towns near our hotel

The town of Capoliveri
Capoliveri is shaped like a ship with its prow facing the sea, and is in a strategic position at the top of a hill; on one side it looks on to the Gulf of Porto Azzurro, on the other to the Stella Gulf, and you can see Monte Capanne in the distance.

The entire town sits strategically at the top of a ridge because it was founded during the Etruscan-Roman period as a fortress, from where both the western and the southern sea areas could be easily watched over; from some of the higher parts of the town, the northern areas, and even Portoferraio - that the Romans called Fabricia - could also be easily watched over.

During the Latin age, Capoliveri had various names: Capitis Ilvae, Caput Liberum, Caput Liseri and Liveri; due to the great financial importance both of the iron mines and the trade, the Rasenna - as the Etruscans called themselves - extended over their confederation's frontier, and this makes the town today without a doubt one of the most historically interesting areas on the island as regards Etruscan presence.

The main square - Piazza Matteotti - is a characteristic viewpoint of the roof tops, and is surrounded by a very lively atmosphere, thanks to also the numerous bars, restaurants and small handicrafts shops. It is a very popular meeting place both for tourists and locals. 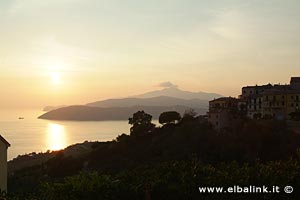 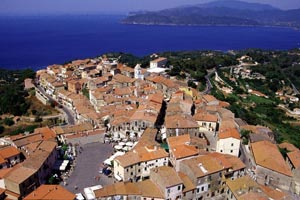 Two of Capoliveri's most important celebrations are:
- the traditional "Festa dell'Innamorata" (Festival of the Betrothed) that takes place every 14th of July, when a procession of people dressed in Medieval costumes starts off from the town and goes down to Innamorata beach; - the famous "Festa dell'Uva" (Grape Festival), when all four districts of Capoliveri compete with each other across the whole town; each district has set up stands for the occasion based on a theme of their choice.

For those who wish, guided tours down to the core of the mine of Ginepro in Capoliveri can be organized.

The town of Porto Azzurro
Commune of 3100 inhabitants, 15 km from Portoferraio, Porto Azzurro stands in a sheltered cove of the Gulf of Mola, and has been a natural port for the Tirrenian Sea routes since ancient times.

It is the modern name for Portolongone, a sea town at the foot of a promontory with the Longone, or San Giacomo, Fortress at the top, built by Phillip II of Spain in 1563; the building is star shaped and in some way reminds you of the Antwerp castle.

The Saracens raided Portolongone for centuries, then it was ruled by the French, the Spaniards and by the Germans, and fought for by the great European powers until 1802; that same year it became part of the French territory. In the beginning of the 16th century, it was the Spaniards, who, following the advice of the Genoese admiral Andrea Doria, decided to build a fortification on the eastern side of the gulf in order to close the bay.

The small town center is very beautiful with its narrow uphill roads, stone houses, enchanting corners and squares, and the large, lively square that reflects on the sea in the harbour. 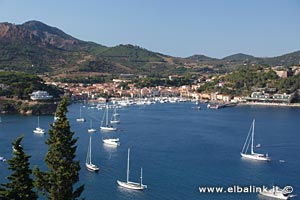 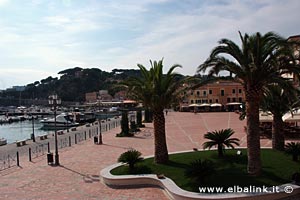 There are three main places to visit:
- The Sanctuary of the Madonna di Monserrato, that the Spanish governor y Leon had built in the seventeenth century, and whose name probably comes from the famous Sanctuary near Bareclona, is particularly interesting. The painting of the Virgin Mary kept inside the Sanctuary, is considered an exact copy of the one in the Sanctuary in Spain bearing the same name.

- Fort San Giacomo, once a Spanish fortress of the XVII century and now a prison, is also worth a visit, where you can buy many very interesting local handicrafts, and the Spanish church with the monument of General Diego d'Alarcson in marble.

- We also suggest a trip from Porto Azzurro to the Terranera Lake and to Monserrato.

Save money on the cost of your ferry ticket. Check up on the special offers if you book through us, or, if you prefer, buy your tickets on line (no booking costs).
Find out how to ...

Our hotel is below Capoliveri, opposite Porto Azzurro, two of Elba's best known and most popular tourist resorts.
Discover these two towns ...

If you want to be kept up to date on all our special offers, join our Newsletter. 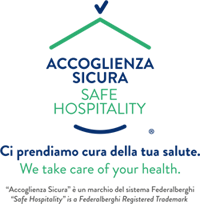